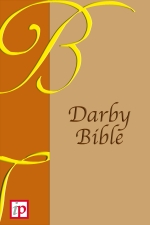 Darby Translation of the Bible

The Darby Translation of the Bible is a reliable translation by John Nelson Darby. More than 125 years after its introduction, it is still considered to be one of the most accurate English translations of the Bible.

John Nelson Darby (1800-1882) went in 1853 to Germany, where he established congregations in Dusseldorf, in Elberfeld, and in other towns. He was dissatisfied with the existing Bible versions in French and German, and so he collaborated with German and French followers in the creation of new versions in those languages. With some German associates he produced the "Elberfelder Bible," and with French-speaking followers he produced the "Pau Bible."

Darby did not feel such a need for a new translation in English, because he considered the King James Version to be adequate for most purposes, and he encouraged his followers to continue to use it. But, he decided to produce a highly literal English version of the New Testament for study purposes. This New Testament was completed in 1867. The version is exceedingly literal, based upon modern critical editions of the Greek text. After Darby's death in 1882, certain of his followers in England produced an English version of the Old Testament based upon Darby's French and German translations. In 1890 this was published as the Old Testament portion of The Holy Scriptures. A New Translation from the Original Languages by J. N. Darby (G. Morrish, 1890). The complete Darby Bible is still reprinted and used now a days.